by James Fuller and Sonya Bateson 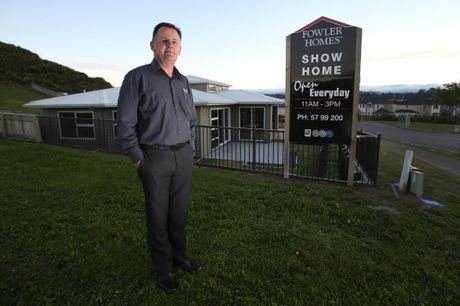 Tony O’Brien, of Fowler Homes, is noticing an influx of Aucklanders visiting the company’s Lakes showhome.

The Auckland housing boom is spilling over into Tauranga as people from the big smoke sell up and build in the Bay.
A number of construction companies spoken to by the Bay of Plenty Times reported an increase in the number of Aucklanders making inquiries and building new homes in Tauranga since the Auckland property market began heating up.
“We’ve noticed a real uplift, especially in inquiries through our showhome at The Lakes,” said Tony O’Brien at Fowler Homes.
The company opened its Lakes showhome a year ago and Auckland interest had increased steadily. Of 100 weekly visitors, 8-10 per cent were from Auckland, said Mr O’Brien.
The majority of his potential customers were in the retired or semi-retired category.
“That age group tends to be asset strong and cash poor. They can sell up in Auckland, cash up, put some money in the bank and retire down here and have a nice lifestyle. It’s a very attractive proposition.
“The biggest problem for younger people and those with families is the lack of jobs in Tauranga.”
Value for money was another attractive aspect, he said.
“I think the Tauranga market is very price conscious. Tauranga is one of the cheapest places to build in the country. There’s a lot of competition here which keeps the prices down. But the quality is also very high and Aucklanders are quite surprised by those two facts.
“People are getting really good value for money.”
Classic Builders director Matt Lagerberg said he had seen an influx of Aucklanders coming to Tauranga to build.
“We’ve sold three or four houses in the last month to people moving from Auckland to Tauranga. The inquiry level from Auckland has picked up over the last three or four months, prior to that it was movement from Christchurch but that seems to have slowed down.”
Mr Lagerberg said he thought Aucklanders were “cashing up” with the high property prices there then coming to Tauranga for the lifestyle and climate.
Bruce Matthews from G.J. Gardner said they had seen noticeable movement from Auckland.
“In fact I’m meeting with an Aucklander this weekend who is building in Bethlehem. We’re noticing it more and more because Aucklanders are able to come down and buy land at a much better price. We’ve been noticing it since about October last year.”
Signature Homes new home consultant Mike Cook said the company was receiving three to four inquiries from Aucklanders about new homes each week.
“We’re also getting a number of clients who are building here from the Auckland region, they’re selling up, building lovely homes here and still have money in the bank. At the moment we have three houses under construction from people in the Auckland area.”